The media has created some pretty controversial images of nurses over the years. Often times, television shows like the hits “Nurse Jackie” and “Grey’s Anatomy” portray RN’s as promiscuous and unethical. Perpetuating the “brainless bimbo” or “naughty nurse” stigma can cause a completely false impression of what members of the nursing community are really like… and yes, every Halloween there’s a “slutty nurse” at the party. In fact, a study from 2008 conducted at Dundee University even found that due to our society’s misconception of the field of nursing, it has caused a fewer number of intellectually advanced students from perusing nursing careers. It even drives debate on whether or not that has been a factor in general under-staffing in the profession. It’s time we address these negative stereotypes in nursing that have certainly played a major role in the industry.

More recently, MTV launched a show called “Scrubbing In” which is a reality show that portrays the young nurses as wild partiers (very much like Jersey Shore or the Real World) and has driven many nursing organizations to ask they cancel the program. The show described the young nurses as “hellraisers” and the preview for the show included them jumping nude into a swimming pool. In all honesty, I can safely say I’ve never seen a nurse jump into any body of water in the buff.  However, we all know that the truth is that nurses are highly intelligent, caring people in reality.

TV dramas and Hollywood films are also causing a negative portrayal of men in the nursing workforce. There are currently less than 10% of men who are registered nurses in the United States; is it possible that negative stereotypes for male nurses are a reason for this? However, despite the lower percent of males in the field of nursing, it is not a female-only career. Males were the root of the profession until wartime caused a need for women to fill the rule. (Did you know famous poet Walt Whitman was a nurse?) In films such as “Meet the Parents”, Ben Stiller’s character (who was a male nurse) remained the butt of many jokes. Additionally, they have been portrayed as incompetent, uncaring, or even rapists and murderers. 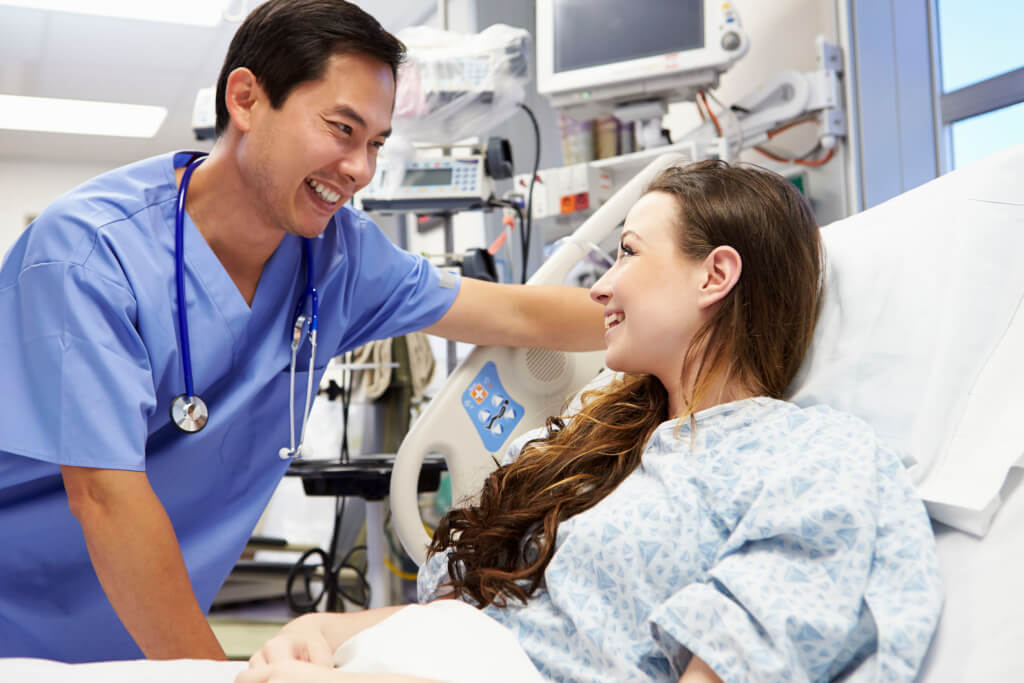 Some other attacks on images of male nurses reflect on their masculinity, sexuality, and intelligence. Many men feel the burden of this insensitivity. Being asked about their career as a “male nurse” when no other field would need to add gender to a job title. After all, no one feels inclined to have to say “male doctor”, “male professor”, “male lawyer”, etc.

When men are seen in healthcare-themed media, most often males are portrayed as doctors or males and very seldom as nurses. Sometimes, too, if men are featured as nurses, they are portrayed as sidekicks to the male doctor or silly and flamboyant. Diversity in the workplace is so important. If our media continues pumping out these negative images of males in nursing, then fewer men are going to view nursing as a viable career option.

One of the most annoying negative stereotypes in nursing is that nurses are flirty. Too often common empathy and friendliness are mistaken for flirting. Patients inevitably realize that RNs are complex people who don’t fit into this made-for-TV “flirty” box. This can cause other similarly harmful stereotypes can come into play. It’s important that patients can distinguish the difference between empathy and flirting. It’s also up to nurses to conduct themselves in a professional manner as well.

The most important thing we can do is to prove the negative stereotypes wrong. We need to focus on the positive images of nurses. Members of the nursing community are some of the most ethical and respected members of the workforce. It’s time we focus more on the truth about nurses. We need to stop perpetuating the inaccurate and demeaning image some media has produced. After all, nurses are not just doctor’s “helpers”; nurses save lives.

For more on the portrayal of nurses in the media, visit truthaboutnursing.org. What are some common negative stereotypes in nursing that you deal with? Comment below!